A few weeks ago we went on a Baltic adventure. I’m going to do a few posts of our days ashore, along with lots of photos. Our third port was St Petersburg in Russia. We had an overnight there so two very full days.

Apart from one place, all of our photo permissions were included in our tour, and the one we did have to pay for separately was about £3 each so not a big deal. As you can imagine, we took full advantage of that and took hundreds of pics. Because of that, I’m going to post the afternoon’s activities in a separate post so I can share lots of photos of the Hermitage in this post and lots more of the beautiful Catherine palace in the next one. Really lots. You have been warned 😉

Before we went on our cruise, I’d spent a lot of time on Cruise Critic, mostly on the Baltic forum, and picked up a lot of tips and information. One thing that had a lot of people worried was that the debarkation procedures had changed this year for St Petersburg. The new ruling was that if you were doing a ship’s tour, you had priority to leave the ship. Private tour passengers had to wait until all the ship’s tours had disembarked. I’d read some horror stories of people being prevented from leaving the ship and missing their tours, and as we’d booked privately, I was a bit concerned.

I checked with reception beforehand and was told that I could just leave the ship when we docked and there wouldn’t be any problem. That sounded promising. We’d also heard that the queues for immigration were horrendous, especially if there were more than a couple of ships in port. For our first day, there were four other ships so again, I was a bit concerned.

So, we were up bright and early for breakfast. Islands was open earlier as we docked at 7am so by 7.20 we were on our way to the gangway. Our tour started at 8.30 so we’d allowed a good hour to get there. We had no problem leaving the ship. It seems that it’s very dependant on which cruise line you’re with. Ours was fine. At the bottom of the gangway were a couple of the crew who pointed us in the direction of immigration. We couldn’t see any queues outside, so that was encouraging and when we entered the building we just looked at each other and laughed. It was empty. It took us precisely ten minutes from walking off the ship to saying hello to the Alla Tours representative. We were an hour early!

Luckily, there were lots of shops in the building to browse in while we waited, and we chatted to other people who had done the same thing as us. By 8.15, the place was full of people waiting to go on private tours. Our guide arrived at 8.20 and took us out to our mini bus. There were fourteen of us in our group, so much better than the coach loads that were on the ship’s tours.

This is our bus with our lovely driver Nicolai. He was great. Not very chatty but pleasant and an excellent driver. 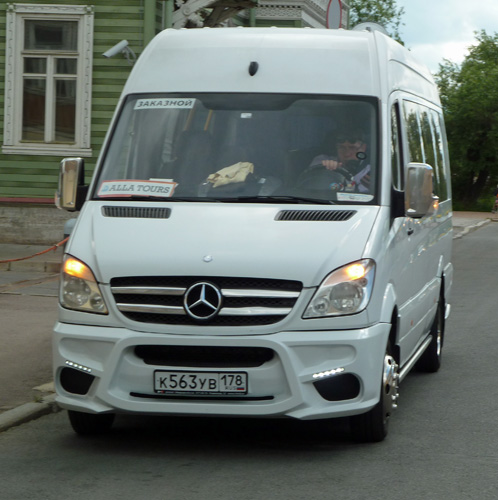 Our guide for the two days was Anna and she was brilliant. She gave us loads of information about places we passed and chatted to us about lots of different things. She gave us a really good overview about life in St Petersburg now and in the past, and answered all of our questions.

We set off for the city and Anna kept up a commentary about the buildings that we passed. We pulled up next to the Neva river and had ten minutes to look at some sphinx statues and the view across the river. 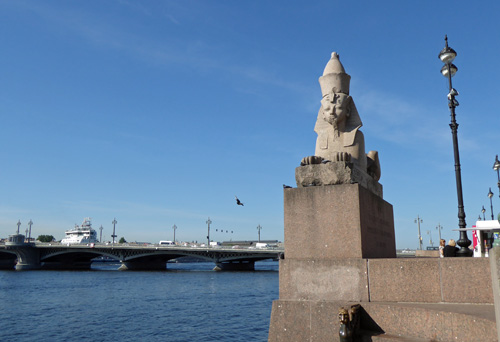 While we were on the bus Anna used a microphone to make sure we heard her but off the bus, we used headsets. It was brilliant. It meant that we could go and look at what Anna was telling us about instead of having to all group round her, and we heard every word.

Our next stop was by the river again where we had a lovely view of the Winter Palace, where part of the Hermitage museum is located. 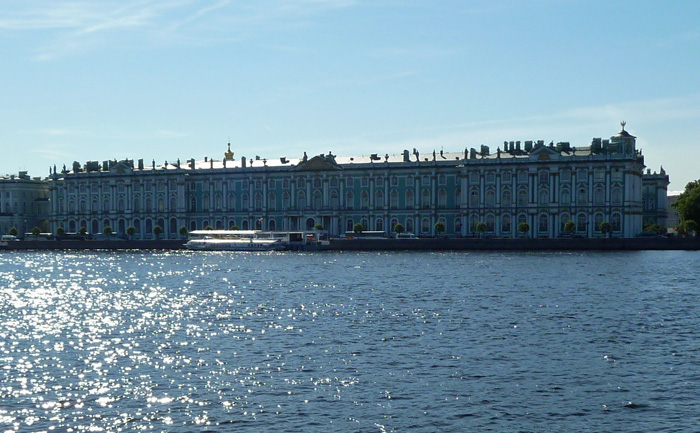 We could also see the Peter and Paul fortress across the river. Both that and the Hermitage were on our itinerary. 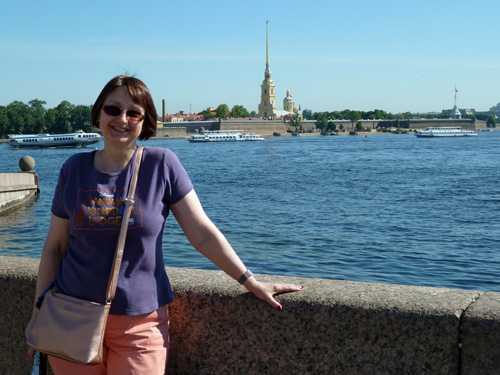 On our side of the river were the Rostral columns – two 32m lighthouses. They were quite impressive. 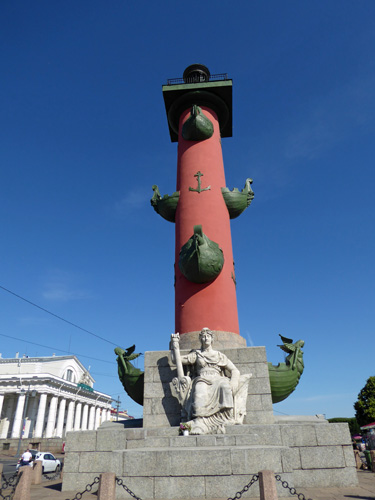 Off we drove again and next on our tour was a subway ride. That might seem an odd thing to do but it was brilliant. The escalator down was really long and fast. It just kept going down and down. (St Petersburg has the deepest subway system in the world.) 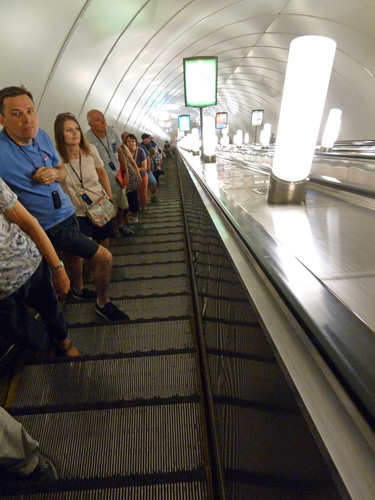 Then we had to get on another shorter escalator as their subways are stacked and we needed the lower one. The stations were beautiful. Not only were they well-lit and clean, but they were decorated with lovely mosaics, paintings and statues. It was quite surreal seeing all that beauty alongside the people rushing about on their way to work. 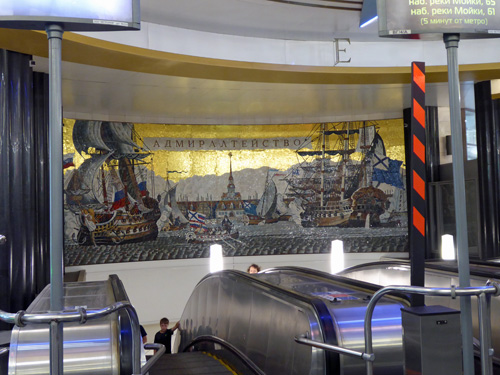 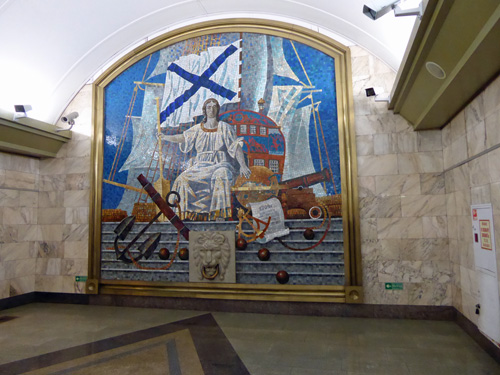 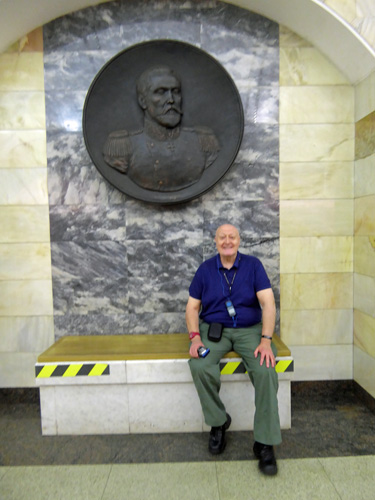 We got on one of the subway trains and went for one stop. It was really fast and a bit of a novelty for us as we don’t have a subway system at home. One of the things that I loved about our tour, was that there was something for everyone. Some art, some culture, some time outdoors and a subway ride.

Our driver was waiting for us when we emerged into the daylight again and took us to our next stop which was the Hermitage. This is a state-owned museum of art and culture and is extraordinary. There are five buildings open to the public and they’re incredibly beautiful even without the artwork.

We entered through the Winter palace, the building we’d seen from one of our river stops. It was even more lovely close up. We had a timed slot here and had early entry before the general admission. Once we were all in, we went up a staircase and as we looked up, our jaws dropped. Just look at this! 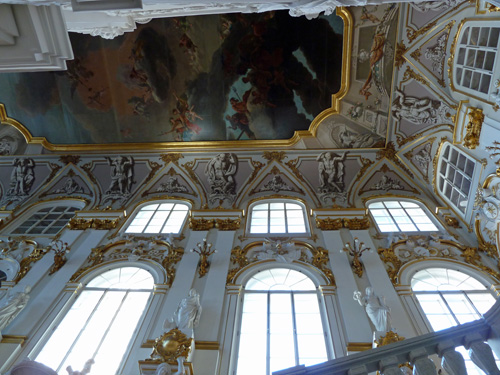 The museums and churches allowed photography, apart from one tiny exception, but did not allow flash. We thought that seemed a reasonable request. 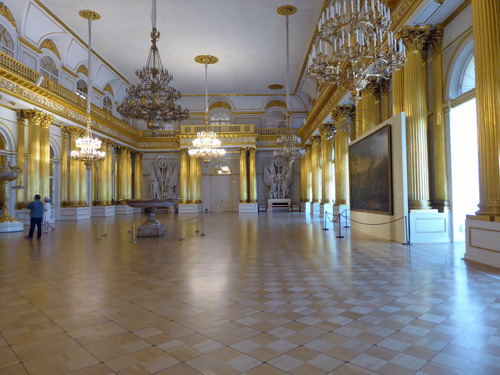 This is one of the most popular tourist attractions in St Petersburg and it does get crowded. You can see from the photo above though, just how useful it was having early entry. It did get a bit crowded just as we were leaving but mostly it was fine.

We saw so much amazing art. Anna was really knowledgeable about it and made it all very interesting. Some of the rooms were incredibly beautiful. 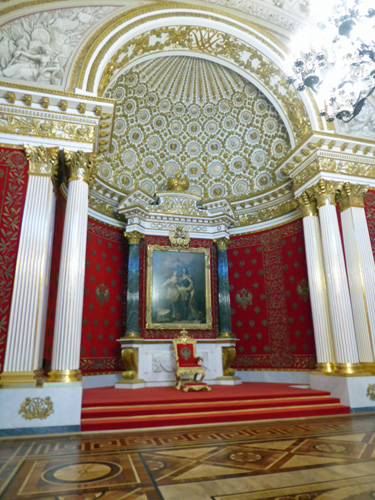 There were 30 rooms for Italian paintings of the 13th – 18th century alone. It was quite breathtaking with art everywhere, such as this one that I really liked. 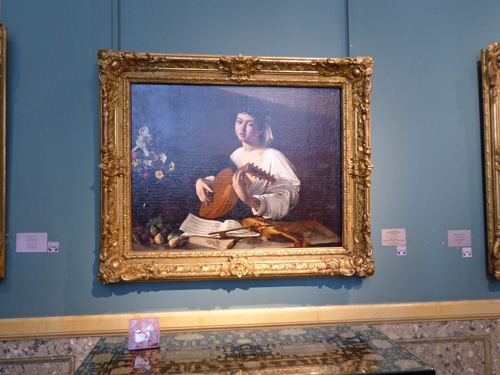 The da Vinci room was lovely. I was a bit in awe. They have two of his paintings. This was my favourite. 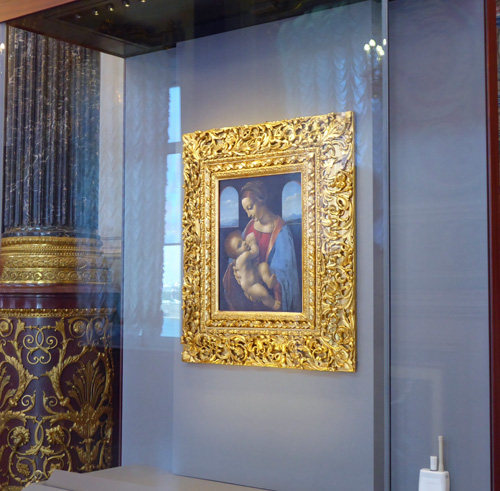 I was also a bit in awe of this. I could have just reached out and touched it. (I’d probably have got kicked out, mind, but I could have) 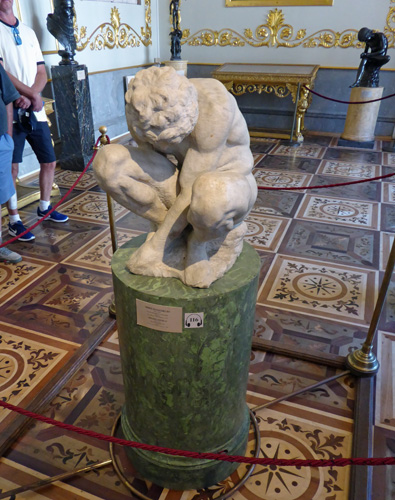 I should mention that neither of us are at all knowledgable about art. I’ve heard of the major artists and I could recognise quite a few paintings, but mostly I just like looking at beautiful things and there was no shortage of that in the Hermitage. Just look at these rooms! 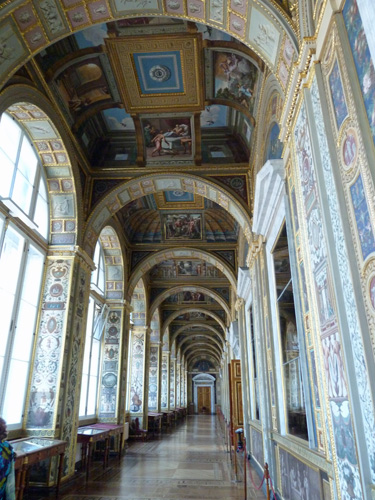 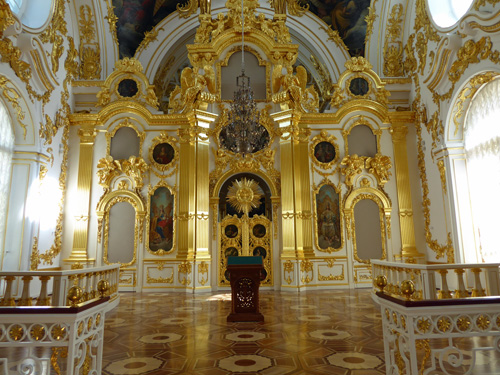 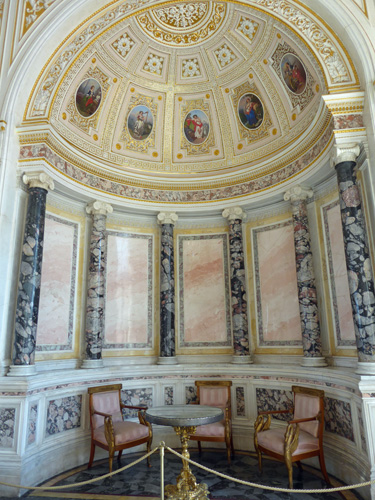 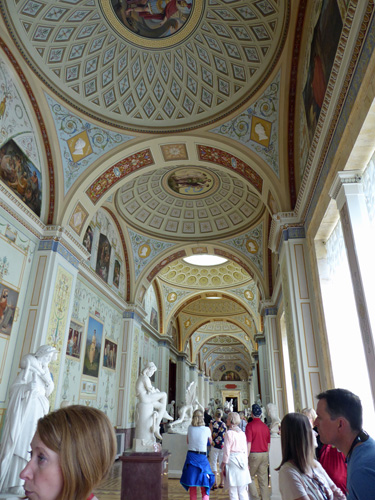 There was a Rembrandt room, where I took a liking to this. 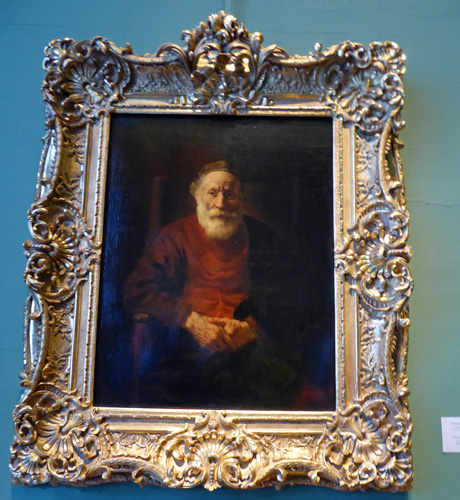 Portrait of an old man in red – Rembrandt

There were lots of interesting things to look at besides the paintings too.

I loved this mosaic floor. 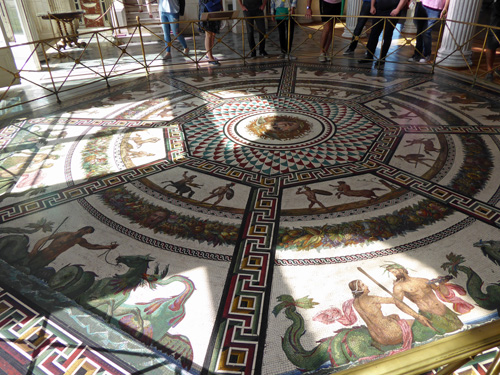 And this gorgeous ceiling. 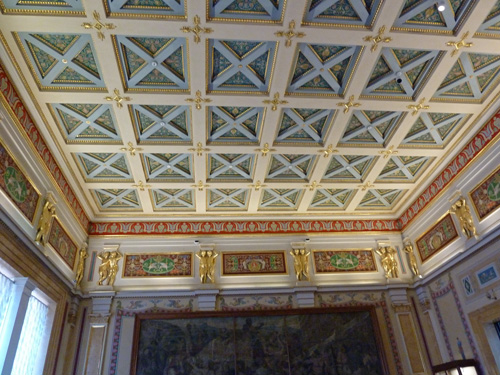 We were in there for about 90 minutes and saw so much but never felt rushed. There was no way you could see everything. Apparently they have over 3 million pieces of art! We got a good taste of it though and thoroughly enjoyed ourselves.

There’s more. There’s a lot more, but I think I’ve put quite enough photos in one post so I’ll continue with the day’s adventures in another post. Next up is St Isaac cathedral.