I’ve gone miniature this last week and have been crocheting little hats for the Innocent smoothies. The idea is that you send them off and they get put onto smoothies around Oct/Nov time and every smoothie that is sold with a hat on gets 25p for Age UK.

I thought it’d be good to do something to support the charity and it sounded like a lot of fun too. Most of the patterns on the official website are knitted but there are a nice selection of crocheted ones too and once I’d done one, I was able to improvise a couple too, using the same base pattern.

First I made the sombrero from the website, and then I started with the crown of another sombrero and made it into an ear-flap hat.

Next I used that same crown pattern and made a sunhat and a garden party hat.

Then I went back to the official patterns and made the shark. He turned out a bit wonky, but he’s still sharky enough so he’ll do. I also made the duck hat, which is one of my favourites. 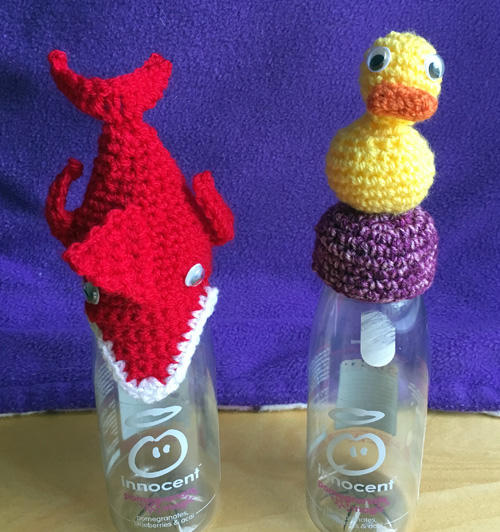 Here they all are together.

After checking back on the website, I spotted that they’d put up a couple more patterns and I got so excited when I saw that one of them was a crocheted unicorn. A UNICORN!! Obviously, it had to be done. He took ages and his horn is one of the fiddliest things that I’ve ever made. I love him though so it was worth it. I’ve named him George.

I may do a few simple bobble hats next before doing any more. I’m thinking of trying to improvise a bear or lion after that.

Is anyone else making tiny hats for the big knit?