Last year I managed to complete just one cross stitch project. The year before was the same. I have a rather large stash of charts and kits waiting for attention and if I carry on at that rate, I’ll never make a dent in them, which means that I really shouldn’t buy any more. That’s not good, as I’m constantly seeing shiny new charts & kits that I need. 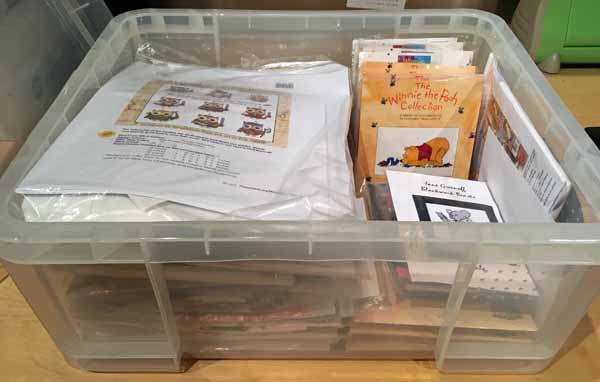 So, I’ve had a sort through and any that really called to me were put to one side as a possible next project. I ended up with five and I know this is very optimistic, given my record, but I’m hoping to complete all five before the end of the year.

This was the first one that called to me. I’ve had this one in my stash for over three years. I loved it when I first saw it as I love most things to do with Middle Earth, plus it has owls. Bonus. 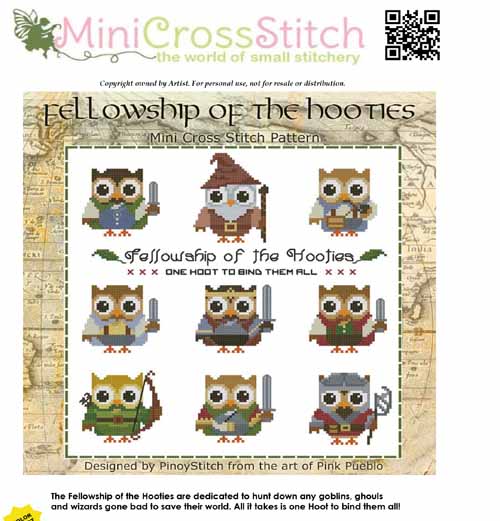 I think it’ll be brilliant fun to stitch and it makes me smile every time I see it.

Next to be put to one side was this one. 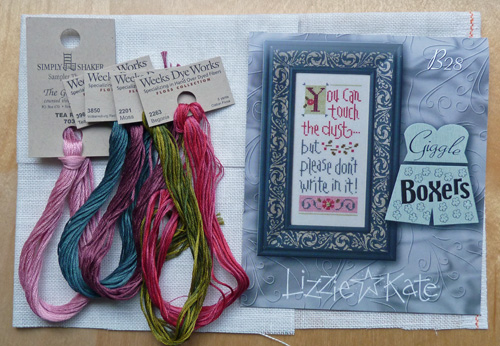 This has been in my stash for at least four years, probably longer. It won’t take long as it’s tiny and I do love using WDW threads.

Then I found this one. I put it to one side, and then put it back in the box before getting it back out again. I fell in love with it at the NEC craft show several years ago and it’s been intimidating me ever since. I’m going to have a go at it, and if I make a hash of it, at least I’ll have tried, right? 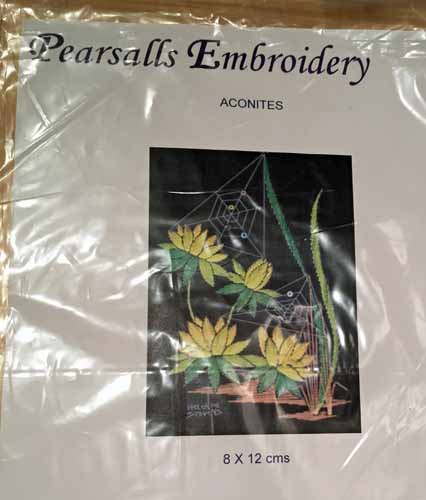 Finally I picked out two by CCN, one of my favourite designers. This one will be a fairly quick stitch and is so pretty. 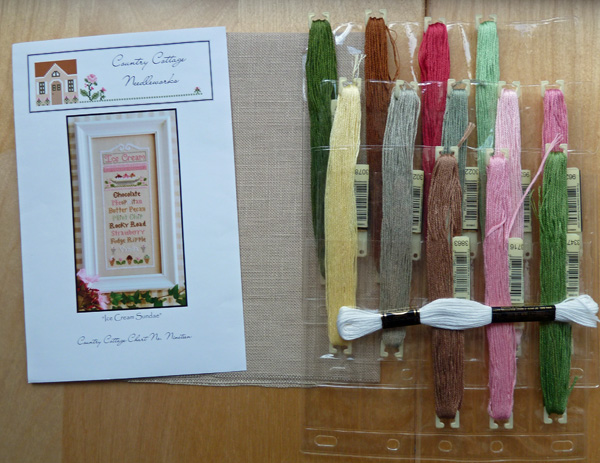 And this one shouted loudest to be freed from the box and has already been started. I thought it was perfect for this time of the year and it’s a nice simple design with only whole crosses, so very relaxing after the last project. 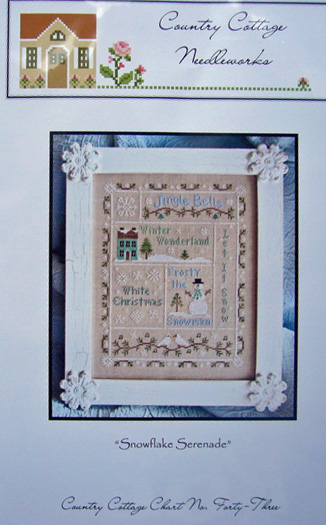 Next Sunday is the SAL post and I’ll be showing off my finished Crazy Cat Lady. The following SAL post will be my start on Snowflake Serenade. Hopefully I’ll have quite a bit done on it by then.

That didn’t take long, did it. I’m rather pleased with it too. I’m not sure how I’m going to frame it yet. It’ll probably be with fabric as it’s an awkward size for a wooden frame. 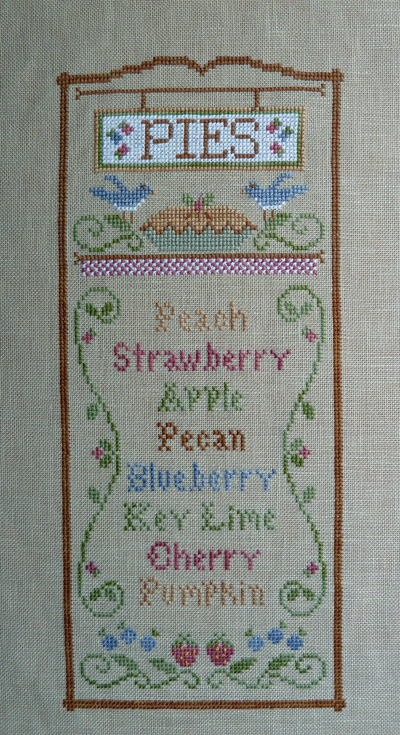 Next I’m going to do some work on one of my WIPs from last year. Then I might have a go at Crazy Cat Lady. Looks like the urge to stitch is finally back.

Just tearing myself away from my lovely new sewing machine for long enough to post a quick update on Pie Menu.

I’ve been stitching away in the evening, still while watching Stargate Atlantis, and have all the bits around the outside finished now.

All I have left to do is list all the yummy pies so hopefully it won’t take long.

I can’t decide what to do next though. Crazy cat lady is calling but I do have several WIPs that could do with some love. Decisions…

I’ve done some more to Pie Menu, while watching Stargate Atlantis. I love that program. I’m getting on quite nicely with my new project. Obviously it was just what I needed to get me stitching again.

I’ve finished the next section and now it looks like this. 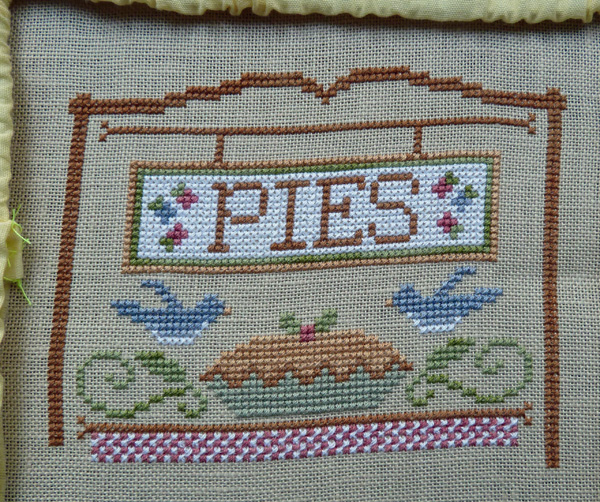 That pie looks yummy, don’t you think? I still have a couple of French knots to do in this bit, plus some straight stitch, but I’ll do that once the rest is finished so those stitches don’t get crushed under the frame.

I have all the blocks finished for my quilt and am ready to sew them all together. That’s not as impressive as it sounds. There are only sixteen blocks and they’re HSTs, so not exactly complicated. I think it’s going to look great though so I’m quite excited to get it finished.

Day one of week two was a bit tougher and my knees weren’t too happy about it but the rest of my legs were fine. Day two tomorrow. I’m hoping the GPS doesn’t give up half way through tomorrow, which is what it did on day one. I love looking at the stats afterwards and it’s a shame when I can only see my pace and distance for the first part. I find it really encouraging to see how I did.

Fingers crossed for tomorrow, both for the GPS and for enough energy afterwards to do some sewing 😉

I haven’t been in the mood for cross stitching for ages. I’ve got one or other of my WIPs out occasionally but just couldn’t get interested in it. I think I’ve found the solution though. I started a new project. I’ve got so many projects on the go as it is, that I’m sure one more won’t make any difference.

It’s one that I’ve had kitted up for a while and is by Country Cottage Needleworks. 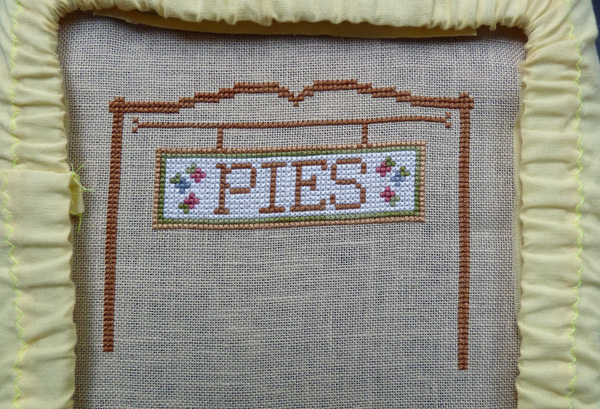 It’s called Pie Menu. I do seem to be thinking about food a lot lately. I’ve recently read five books by Jenny Colgan. One was set in a bakery, two in a sweet shop and the other two in a cupcake shop. Maybe it’s because I’ve spent so much time online looking at all the lovely dishes that are waiting for me at Epcot’s Food and Wine festival.

We’ve just signed up for Netflix so I’m currently re-watching all of Stargate Atlantis while I stitch. I love that show.

This is some of the fabric I’ll be using. 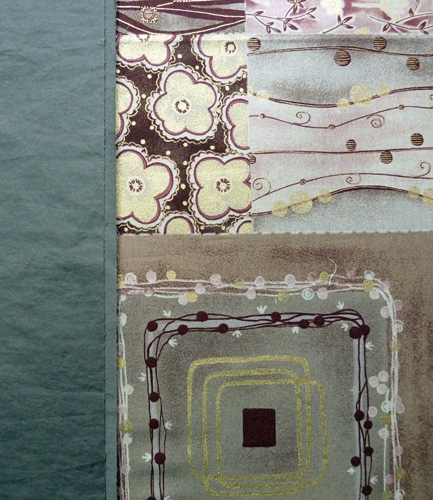 I’ve done most of the cutting up and am ready to start sewing it all back together. It’s a very simple design so hopefully won’t take me long.

The last one, all framed and finished. 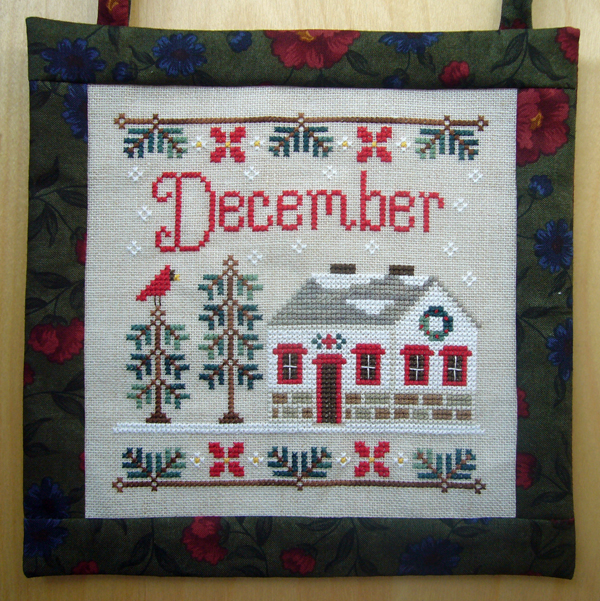 I found a lovely fabric for it. It’s green, with red in it, and it also has blue. Ok, so there’s no blue in the stitching, but the greens have a bluey tint to them so I think it goes quite nicely. It’s from the same Honey Bun as all the rest were.

I am so happy to have finally finished these. I had no idea it was going to take so long to get done. It’s not that it was a time-consuming process. It’s more that I have so many other things that I want to be doing and it was taking time away from them. Doing four or five would have been fine but twelve was definitely pushing it.

Having said that, I’m chuffed to bits with how they all look on the rails. It may have taken almost a year to do, but it was worth the effort.

I have lots of the Sandhill Plums fabric left so I’m planning on using it for other things now that I know which colours I won’t need for the Cottages. I’m using some for a cushion . At least, I hope it’ll be a cushion. I have to get a zip in it yet.

Another one of the fabric-framed Monthly Cottages. The colours in this one didn’t appeal when I received it, nor when I was stitching it. It did grow on me slightly while I stitched but it wasn’t a favourite. 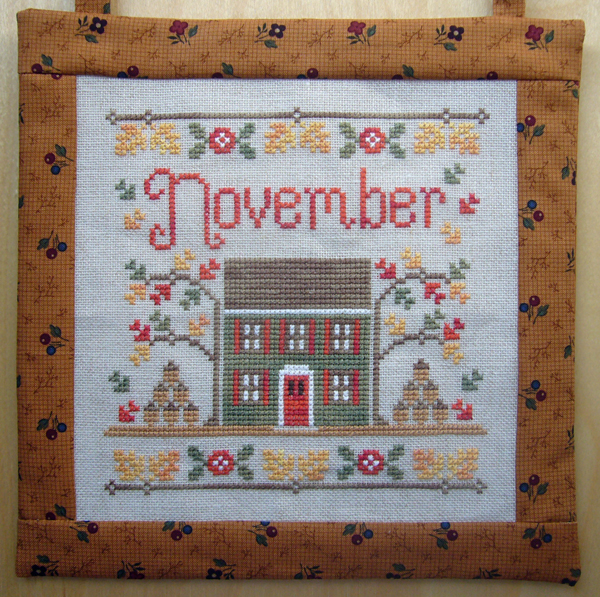 Now I have it framed, I like it a lot more. I’m really happy with the fabric colour that I picked to go with it. I think it tones down the green and red of the house and blends in with the autumn colours.

Just one left to upload. It is finished, I just need to get a photo of it and another one of all of them up on the wall.

This was one of my favourite cottages to stitch. I love October colours and I love pumpkins so I was looking forward to seeing what this one was going to be like. 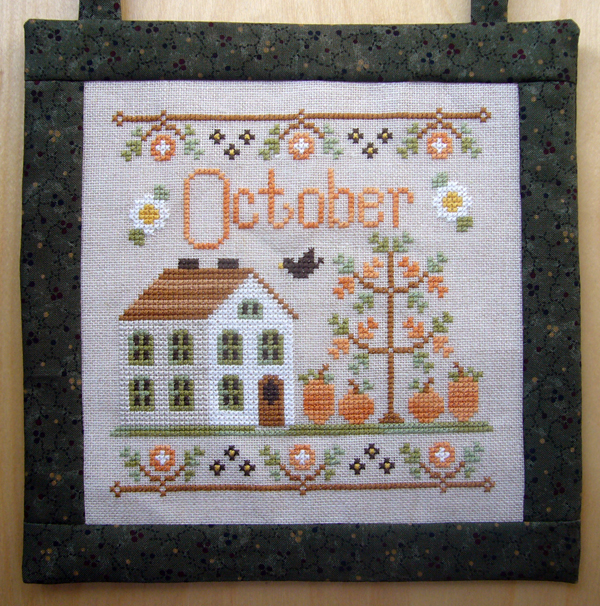 I picked a darker fabric for this one. It’s a greeny colour, which isn’t showing up too well on my laptop. There are orangey dots in it, which I think look good with the stitching.

This cottage was one of my least favourites when I originally stitched it, but I like it a lot more now it’s got its frame around it. I think it was too red before and I prefer it with more brown. 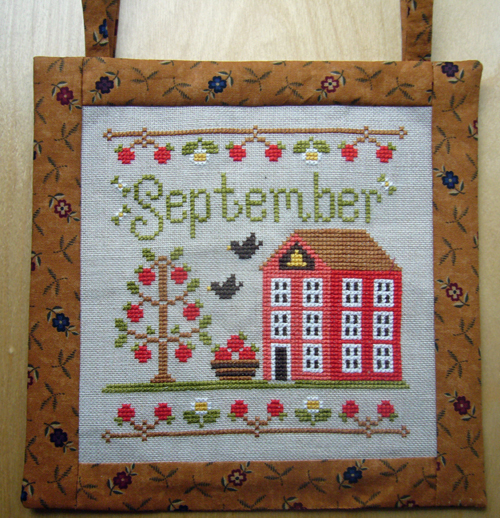 I’m getting through these quite fast now. It’s helped a lot doing prep on them such as cutting all the batting to size and ironing on all the interfacing. All I have to do is pull out each one and the fabric is sitting with it, with the backing cut to size. All I have to do is cut the linen and the Honey Bun and put it all together.

The poles they’re on are looking good now. I’ll take a final photo of them all hanging up once I have the last three finished.

It was quite difficult to find a fabric in the Honey Bun to match this one as it’s so pastel, but I think this one does the job ok. Once again the bottom looks much more wonky than it actually is. My camera has such a sense of humour… 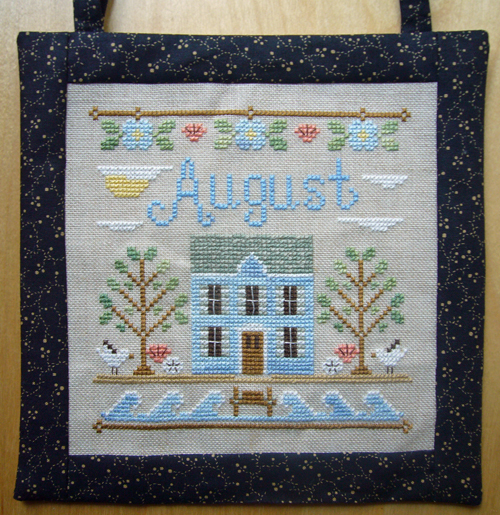 Eight down, four to go.

A slight obsession with books
Blog at WordPress.com.
Loading Comments...