All that lovely yarn that I bought at the NEC was calling to me. I knew what I wanted to make with some of it and as I had the pattern printed off already, I thought I’d start with this.

It’s made with the mega-chunky yarn so it crocheted up very quickly. I did it over two days but if I hadn’t been watching TV at the same time, I could easily have done it in an afternoon. It’s made on the spiral like the bunnies were so I was familiar with the technique this time. There was a tip given to use a stitch marker in the first stitch of each round, just removing it to hook into the stitch. I’d used a stitch marker on the bunnies, but lower down which made it harder to see where it was marking.

The hat has an asymmetric turn-up which I really like. The example has a button stitched on for decoration but I didn’t have anything suitable. I did have a large brad though, which I found when checking my scrapbooking stash for buttons. The brad is just through the turn-up and a small stitch stops the turn-up from flapping down. 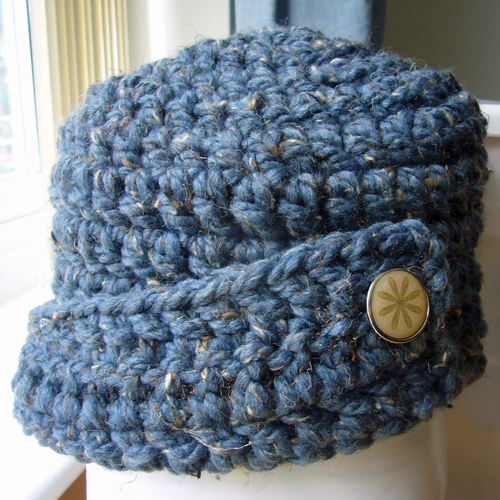 If I come across a button that I like better, it’ll be easy enough to replace the brad with it.

This is the back and side to show the slope of the turn-up. 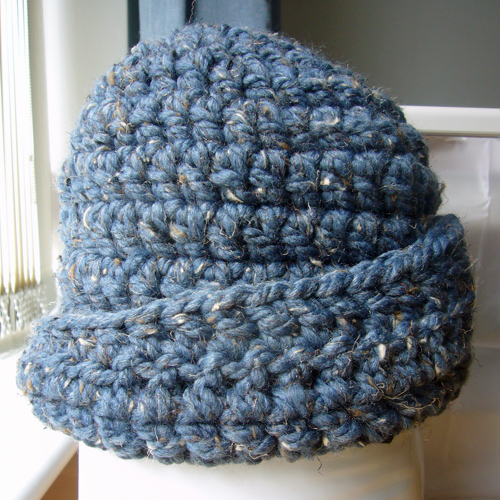 It does actually look more hat-shaped on my head than it does on the bag of toy stuffing. This was the easiest way to get a photo though.

The yarn is James C. Brett mega-chunky in Denim and I used a size 8mm hook. The pattern is by Dianne Serviss and can be  bought on Ravelry.

I’m making a scarf next using the pretty DK yarn. I have just the pattern for it.