A while back, I bought the first four books in the Agatha Raisin series for my Kindle. I think they were in one of the sales so I probably paid about £1. Bargain. It’s taken me a while to read them as although I liked the first book, I didn’t love it. I have recently read the last three books though and enjoyed them enough to want to read more in the series.

I went online and had a look how much it’d be for the next few books. No point just getting one as once I get my teeth into a series, I want to read the lot. Sadly the best price I could find on Amazon was about £5 – for just one book and I didn’t want to spend that much.

Next stop was The Book People to see if maybe they had the next four in the series as a bundle. I didn’t find the next four, but I did find the first 20, and at just £1 per book, it was well worth buying that, even though I’d already read the first four.

Problem was that I’d then have to pay shipping – unless I spent a bit more to get the total over £25. After a look through the collections to see if anything looked tempting, I found an eight book collection of Hemingway. Four of the books are ones that I’ve already read, but I wouldn’t mind re-reading a couple of them. I loved For whom the bell tolls! The other four are on my wish list so I added those to the order making a total of twenty-eight books. 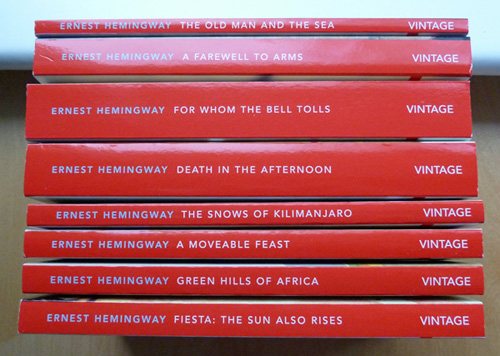 They’re not the prettiest editions, but for £1 per book, I don’t really care.

The Book People are usually quite fast at delivering and the parcel came after a few days. Is there anything nicer than getting a big box of books through the post? 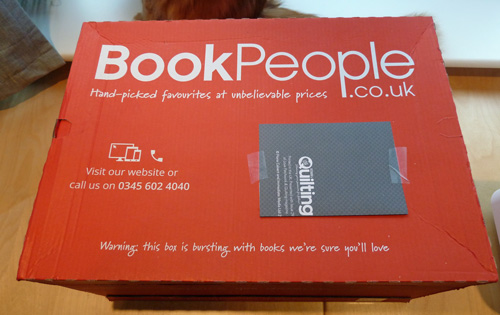 The cats are quite happy too. Frodo was very keen to get the box open and to get all of my stuff out of it so that he could play in it.

Both cats have had fun sitting in it so far, and I’ve had fun putting all the books in my spreadsheet and then shelving them. They just fitted on the To Be Read bookshelves which I’m taking as proof that I’ve managed to read quite a lot of books off there. I think I need to read a few more before I go book shopping again though.